Title: Of Flesh and Grance and Something In Between
Author(s): Mistina60 of the Crank ol' Fangirls
Beta: MY MOM!!! (Seriously, Mistina60's mother proof read this chapter)
Series: Person of Interest and Supernatural
Pairing(s): Shaw/Root (Team Shoot), Dean/Castiel (Destiel)

Summary: Shaw can't believe this is her new life. Afterlife? Unlife? Second life? Ugh. Whatever. She has more important things to figure out. Like how the Hell she became the nexus between a bloody civil war up in Heaven and the battle between two God-like A.I. machines down here on Earth?!

Author's Note: After watching "Person of Interest" 4x11, I was in denial and I immediately put together a crossover fix it to pacify myself. Later the show revealed that I had nothing to be worried about. Well, not when it comes to Shaw. ^^;;

This is that fix it. I hope you enjoy my canon denial. <3

The abyss reached for her.

Title: Fire Alarms are for Emergencies ONLY! (Though in this Case I’ll Make an Exception)
Author(s): Mistina60 of the Cranky ol’ Fangirls
Beta: none
Series: Supernatural
Pairing(s): Dean/Castiel

Inspired by a prompt that I’m quite sure wasn’t meant for this particular fandom but here it is as a Destiel University AU!

Third year Theology major, Castiel, had become accustomed to stupid and/or drunk students pulling the alarms throughout the year at stupid hours. He didn’t like it, but he had come to accept it. This particular prank alarm, however, might make them all worth while.

No matter what sexuality, gender, species, or universe he finds himself in, Castiel will still be Castiel.

No two people are alike and asexuals are no exception. We vary from socially inept to socially adequate to social butterflies to social gods. We come in all shapes, sizes and colors. We all are capable of having a wide variety of skills, interests, hobbies, preferences, etc.


A shrill beeping sound shattered the comfortable silence of the dorms. The loud insistent alarm roused the students into a chorus of sighs and groans and cussing. Castiel, a third year Theology major, was among them.


Rating: 14a for mature language
Spoilers: You just need to know who Castiel and Gabriel are and you’re good.
Length: 824 words


Summary: Gabriel is a firm believer of ‘Grace before Blood’. Yup. It’s true. Deep down he’s a family guy… Well, only if the family member in question isn’t a big bag of dicks. (Revised 2014/03/14)


Gabriel is a ‘big bag of dicks’ and proud of it. He likes hunting the wicked, finding their deepest darkest secrets and rubbing them in their faces. The darker the sins, the more salt he poured into their festering wounds. The worst of the sinners he smites off the face of the earth—after he's had his fun, of course.

Not long after the Kaiju appeared, wrecking havoc around the world, so did another destructive force: Kira.


Unlike the Kaiju, who were not of this earth, Kira was human. This madman used the Kaiju as a symbol to gather followers and to mete out his perverse justice. He racked up a body count that rivaled that of the monsters he used to manipulate the minds of his fellow man.

Summary:Sam Winchester’s laptop is caught in the whirlwind of two idiots dancing around their love.

Dedication: As always, To my muse, Sailor Shipper. To AnaBRose and

stormlyht for the wonderful beta. To

bookkbaby who inspired me to write a different ending for this story, one that I think is more creative and better suited for our boys. Thanks, guys!

Summary:Sam Winchester’s laptop is caught in the whirlwind of two idiots dancing around their love.

Dedication: As always, To my muse, Sailor Shipper. To AnaBRose and

stormlyht for the wonderful beta. To

bookkbaby who inspired me to write a different ending for this story, one that I think is more creative and better suited for our boys. Thanks, guys!


Summary: Dean decides that he and Castiel would celebrate their first Halloweens together. Nothing  goes quite as planned but what else is new? (Revised 2016/04/12)


Dedication: Dedicated to Cinensis, a friend who unwittingly started this whole thing, Bookkbaby, a friend who needed some Castiel fluff, and Sailor Shipper, my partner in crime who—without which—I wouldn't be writing at all.


He really should be used to this by now, the whole ‘Castiel popping in and out via Angel Airlines’ thing. After four years he really shouldn't be caught off guard. All the same, Dean was fifteen minutes into a rerun of "Doctor Sexy" and, as everyone knew though he will deny it vehemently to his death and then some, he gets completely absorbed in the show. Completely.


Dr. Sexy was his kryptonite.

Title: Conversation with a Q (I Actually Like)
Author: Mistina60
Beta: none
Series: Star Trek the Next Generation and Young Avengers
Pairing(s): Billy Kaplan/Teddy Altman a.k.a. Asgardian/Hulkling


Summary: Picard never thought he’d ever see the day when he is rescued from Q by another Q. Much less a day where said other Q would also require their help. (Revised 2016/02/18)


"Q! " Picard startled at the scolding voice directed at the infuriating trickster, as it wasn't his own. "Leave them be! "


He whirled about to find its source, as did the rest of the bridge crew. Standing in front of the closed turbolift doors was a young, seemingly human, boy in a red Starfleet uniform. He was staring down the omnipotent miscreant.

Said miscreant, who was casually leaning against the captain's chair, smirked and drawled, "Yes, Q~? "


The stranger's face scrunched up in disgust. "It's Billy and you know it."


"I do," Billy said with a withering glare which, for some reason, only elicited another laugh from the trickster.


They were so very, very lost. 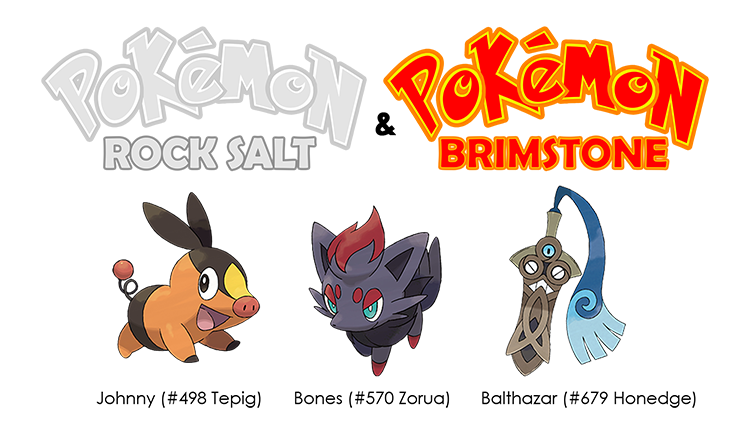 Summary: Dean Winchester is finally an official Pokemon trainer! With his Tepig, Johnny, they set off on their journey— Oh, wait. Slight delay. He already lost his trainer card. (Revised 2016/04/07)

A small boy stood on the side of a path lined with tall grass, a furry companion cradled in his arms. The dry blades tickled his nose as he peered in to get a better look at the jostling grass not far from where he stood.

"Dean, is that you?” he called out again, only to be met with more silence. The Pokemon he held, a Zorua, yelped in surprise when he suddenly hefted it up above his head so that it might confirm his suspicion. “Can you see him, Bones?"

"Yeah, Sammy…" Dean groaned, standing up to reveal himself, stray blades of grass stuck in his clothes and tangled in his hair. "…it’s me."